Canada is one of the best study abroad destinations 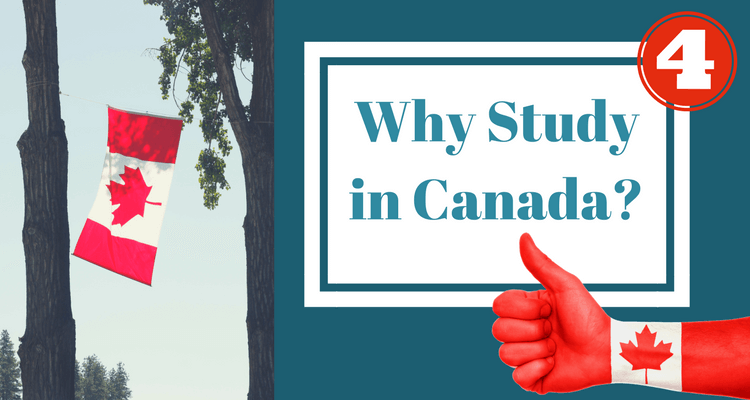 Many parents prefer to send their kids abroad to get their university education. According to an HSBC report, Canada is the fourth country that parents are most likely to consider for their child’s university education abroad in spite of high tuition fee for international students.1

According to the U.S. News Best Countries 2017 ranking, Canada is ranked first for quality of life. The rankings were measured based on the economic stability, job market, affordability, safety, politically stability, family friendly, public education and public health system development and income equality.

Canada does not only rank first for quality of life but also rank second best country overall according to the U.S. News Best Countries Rankings. It took second place after Switzerland and followed by the United Kingdom, Germany, and Japan. The survey evaluated 80 countries in a variety of categories including cultural influence, citizenship, economic, quality of life, political influence, government transparency, and education.

Lists of the top 10 best countries in the world, according to U.S. News & World Report.

Canada is a beautiful and friendly country. No wonder why it is considered as “the most admired country” for having an appealing environment according to the 2016 Country RepTrak survey. “While Canada leads the world in external perceptions as a great place to study or visit, the research shows we can improve the perception of the nation as a business destination and desirable investment environment,” said Daniel Tisch, CEO of Argyle Public Relationships.2

It is not surprising that more and more international students choose Canada as their study abroad destination. David Turpin, the president of the University of Alberta, also said, “We have a rising tide of isolationism and exclusion in Europe, in the United States, and people are looking to Canada.”3 No wonder why Canada has now becoming a popular study abroad destination. “We will have these incredible students who will be educated in Canada, and in many, many cases go back home and build linkages that are crucial for our future development,” he added.3

Also, university tuition fee for international student in Canada is significantly lower compared to other countries such as the United States and the United Kingdom which makes Canada the first place to consider for studying abroad. One of the many foreign students that agree with this statement is Jamal Yayha. He is one of the international students who chose Canada as a place to study.4 He first thought to go to Denmark to study, but later he chose Canada because the tuition fees are cheaper than the United States.4 And the visa process is also simpler than in the United States; he told The PIE News.4 He admitted that he instantly fell in love with Canada within the first month of his stay in the country, and would enthusiastically recommend it to others.4

Studying abroad does not only help students gain international knowledge and experience but also help them prepare for the challenges that they have never had encountered before. Studying abroad helps students develop a personal growth mindset. It allows them to experience the cultural differences, explore their interests and freedom.