10 Fatal Mistakes to Avoid in IELTS 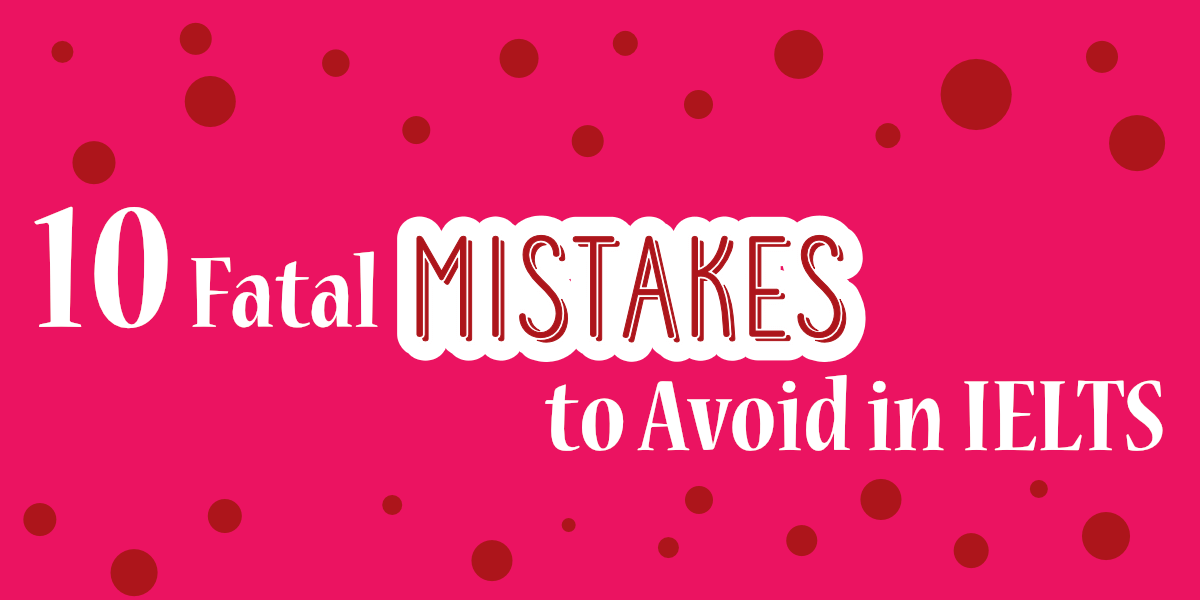 The world we live in is increasingly becoming globalized, with an ever increasing amount of international trade, commerce and travel. As the level of global integration has accelerated, there has been a marked increase in the demand for a common medium of expression, something which the English language has taken the place of.

English is today one of the major languages for education and employment, particularly in the countries where the language is used in everyday life, the course of study or any business related matter. This is where the IELTS exam comes into the picture. IELTS or International English Language Testing System, is a very popular exam used for the testing of one’s English ability. It is a standardized exam used by educators and businesses alike because of its ability to accurately estimate one’s English proficiency. IELTS is jointly managed by the British Council, Cambridge English Language Assessment and IDP.

The exam is taken by people all over the world on a fairly frequent and regular basis. It is something that is an absolute given, since we live in one of the most globalized times in human history. However, the fact is that not everyone who takes the test clears it. In fact, there are actually a vast percentage of test takers who are not able to make it.

There are several reasons why this happens. Some of the most important are given below. The following are 10 fatal mistakes to avoid in IELTS.

1.) Not taking the questions seriously

The exams are standardized, meaning that you are expected to answer the exams in a standardized manner. What this means is that you will need to answer to the point. For example, if they ask you to answer in 5 words, don’t try to answer with 6 words with the idea that it will help you score more.

2.) Not reading the question properly

Too many people get excited when they begin the exam to the point that they forget to fully read the question. What happens when you do this is that you can end up missing the exact nature of the question and will very likely end up giving the wrong answer.

As much as you are under stress when you are writing an important exam, it is important that you maintain your composure and stay calm. Failure to do so will cause you to forget all that you’ve learned and make mistakes.

4.) Not realizing that less means less

Questions will often ask you to answer within a certain word limit (250 words for essay and 150 for report/letter). When the question mentions that you must stick to a certain word limit, stick to it. Never write a little less because you will never know whether it is going to make you lose marks.

6.) Not planning out your answers

This is related to the previous point. Always plan out the answers you write before attempting any questions. If you don’t do this, you might end up making a mess along the way and waste a great deal of time in the process.

7.) Not paying attention to your accent and pronunciation

It is understandable for non-English speakers to have a certain amount of mother-tongue influence. But try to speak as much as you can with a neutral accent. Likewise, pay attention to the pronunciation of the words. This is in fact more important than your accent, for you can overlook the accent but not the pronunciation.

8.) Focusing more on your idea rather than the way you express it

It is not uncommon for people to get carried away by an idea. But remember that you are not there to impress people with your ideas. On the contrary, you are there to impress the evaluators with the quality of your English. Therefore, pay attention to your grammar, sentence construction, vocabulary, spellings, etc.

As much as you should be confident in your exams, a little bit of stress couldn’t hurt. Overconfidence is about as bad as getting stressed out. It is important that you avoid being too overconfident, for it could lead you to make mistakes along the way that you never intended to.

10.) Not staying calm during the exam

Regardless of how stressed out you might be feeling, it is important that you answer all the questions in a calm and composed manner. Stressing yourself out is going to have the same effect as being overconfident, which is to say that you will end up forgetting a great deal of what you’ve studied.

As a whole, if you can just pay attention regarding the 10 fatal mistakes to avoid in IELTS and find appropriate ways of dealing with them, your chances to get a great score in the IELTS test will be a whole lot higher.